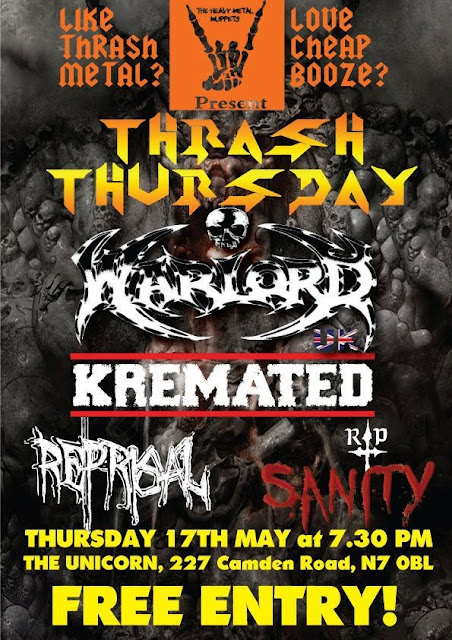 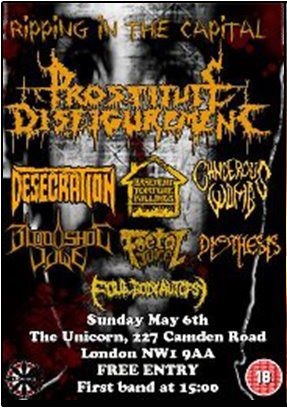 DE PROFUNDIS album launch for the 'THE EMPTINESS WITHIN' 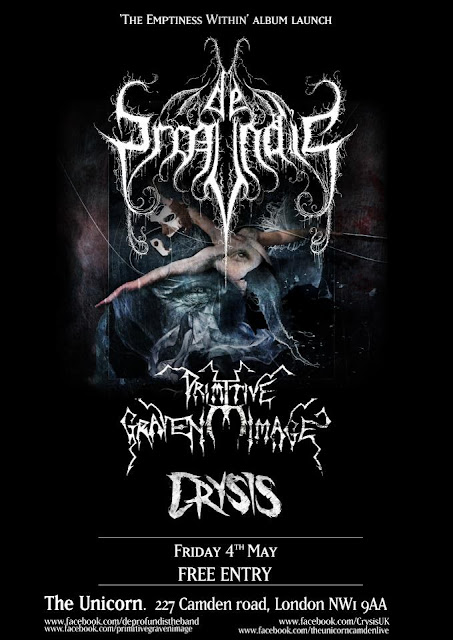 "Emerging from the outlying areas of Oxfordshire and attempting to break the barriers of Metal, we are Crysis. A band formed in mid 2010 consisting of five guys who have a thirst for delicious crunchy rib-shattering beatdowns and fast paced riffs that get the blood pumping."

"Primitive Graven Image was formed in 2006 by guitarists and brothers Rob and Luke Lehane, out of a love for the traditional black metal style

Now, ‘Celebrating Impending Chaos’ is finally finished and lies quietly awaiting its destiny. A worldwide deal has been struck with a new label.. more details on this to come with the official press release. Diverging from the traditional black metal style slightly, the new material features influences ranging from the epic death metal of Nile to the beautifully misanthropic noise of PGI’s fellow countrymen Anaal Nathrakh and The Axis Of Perdition. A dose of 70s progressive rock may just be heard bubbling away in the background, whilst chaotic thrash riffs weave in and out of melodious and highly atmospheric black metal."

"De Profundis was formed in November 2005 by vocalist Craig Land and guitarist Roman Subbotin. As the band’s sound evolved over the course of the next 18 months, Christophe Szpajdel (Emperor, Enthoned) was approached to design a suitable logo reflecting the band's music visually. The band underwent several personnel changes until a stable and committed line-up was completed with the recruitment of Aleksej Obradovic (bass) and Shoi Sen (guitar), with David Andrews stepping in to play the drums on the recording. In April 2007, De Profundis recorded its first album, entitled ‘Beyond Redemption’, which was mixed by Steve Watkins at Warehouse Studios, Oxford and mastered by Tim Turan at Turan Audio (Dimmu Borgir, Opeth, Emperor). Achilleas Gatsopoulos (Dark Tranquillity, Arcturus) created the artwork for the album. ‘Beyond Redemption’ self-released in August 2007.

Delivering unique-sounding progressive extreme metal, De Profundis has many genre-bridging elements to their sound spanning across death, black and doom metal right through to jazz and progressive rock. These draw on a wide range of influences and the diverse nationalities of the band members. Having played their first show in September 2007 with drummer Sterghios Moschos, De Profundis has been delivering high impact live performances to rave reviews and enthusiastic crowds, being voted the 6th Best Unsigned Band in the 2007 Terrorizer Readers' Poll.

Following further glowing reviews, De Profundis was invited to perform at the MMD Festival in Athens (Greece) in March 2008. Upon returning from Greece, the band supported the French band Misanthrope on both of their exclusive UK shows. In July 2008, Nick Tingle replaced Sterghios Moschos, making his live debut with De Profundis at Bloodstock Open Air 2008 Festival. In December 2008, De Profundis was handpicked by Zero Tolerance magazine to take part in their showcase "Day of Unrest" gig.

In February 2009, De Profundis supported Iron Maiden at the Rock in India Festival in Bangalore, India in front of 20,000 people. On the back of this performance, Sony BMG gave the band a record deal to release their debut album "Beyond Redemption" in India.

With De Profundis now putting all their effort on completing their sophomore album, growing musical differences resulted in Aleksej Obradovic departing from the band and being replaced by Arran McSporran in May 2009.

In the months of June and July 2009, De Profundis recorded their second album "A Bleak Reflection" with producer Fernando Pereira Lopes (Misanthrope, Orakle). The album was once again mastered by none-other-than Tim Turan at Turan Audio. Darryll Jones created the album's artwork.

August 2009 saw the band resuming its intensive live schedule with a show in Bucharest (Romania) and an appearance at Portugal’s Festival Ilha do Ermal 2009. In Autumn 2009, De Profundis performed in Paris (France) and toured across Northern England and Scotland.

Following the European release of album "A Bleak Reflection" on Kolony Records in February 2010, De Profundis officially launched the new album with a show at the Underworld, London. The band returned to play at the Underworld several weeks later for the “Infernal Damnation VI” festival. In May 2010, De Profundis undertook a two-week European tour with Ragnarok (Norway) and Noctem (Spain), performing in Germany, Austria, Poland, Holland and Belgium.

Following the European release of "A Bleak Reflection" several months earlier, De Profundis signed with Relapse Records for exclusive distribution in USA and Canada. Following the success of the band’s first album, Sony BMG released “A Bleak Reflection” in India in June 2010. With the support of the British Council, De Profundis returned to India on a headlining tour in October 2010, which included co-headlining Kingfisher’s Octoberfest 2010 in Bangalore in front of 30,000 alongside Lacuna Coil.

In April / May 2011, De Profundis went on a 14-date European tour with Rotting Christ and Omnium Gatherum, performing in 11 countries across Central and Eastern Europe.

The third De Profundis album 'The Emptiness Within' will be released in May 2012.