Today's show is a rather dark and DOOM-laden affair kicking off with Photon from Belfast, Northern Island. This Sludge/Stoner outfit got together in 2014 and thus far have just the one EP to their name, a self-titled effort from 2015. I played them on my Superhero and my Space themed shows as I like the cut of their space-Doomy jib. 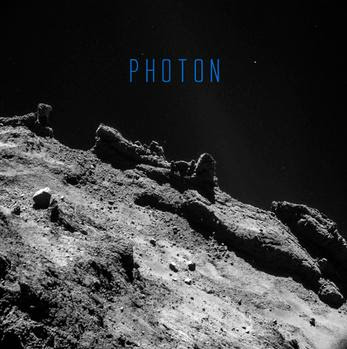 Get this crushing EP for free, or name your price, from their Bandcamp page HERE 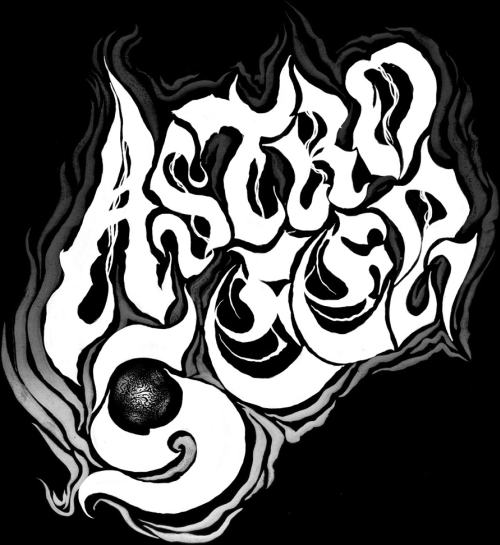 Next up we have some more space-themed Stoner stuff, this time from Philadelphia in the USA, where Astroseer ply their Doomy trade. They also formed in 2014 and have a single "Saturn" and an EP called "Infinite Lapse" in their resume. 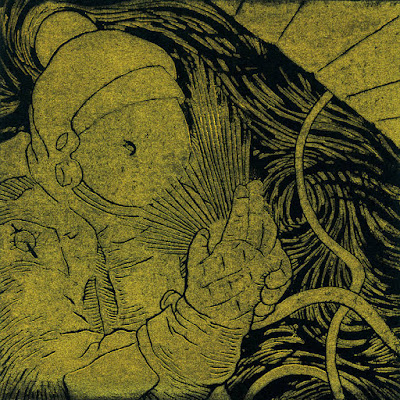 Lastly for this week we have Hyponic, these guys from Hong Kong, China started out life as Doom/Death before trundling slowly towards Funeral Doom. They have 3 full-length albums to their names and their latest opus from 2016 is called 前行者, and no I have no idea how to pronounce that or even what it means!! 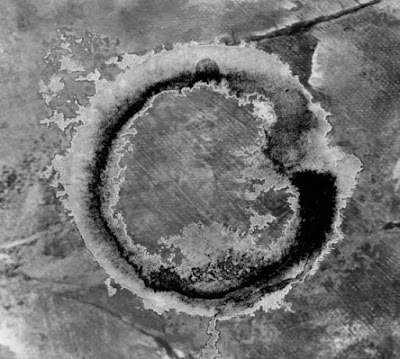 If you want to check it out, go get it from their Bandcamp page HERE

So this week I am talking about one of my favourite demo bands, Warpspeed. I only got to see these guys once in my life which was a real shame cos it was an awesome gig back when I was still young and fit enough to mosh all night. They had 2 demos out in the late 80's and I have played them to death over the years. When I discovered Metal Archives these were one of the 1st bands I looked up and finding that they never had a page I made one on there myself. 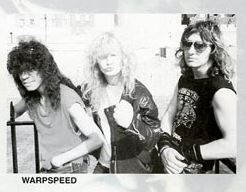 The band were a 3 piece with -

Their 1st demo "Break The Silence" was released in 1988 and had two tracks on it "Broken Silence" and "Overcast". The tape sleeve for this says there is a special appearance on drums by Terry Smith. 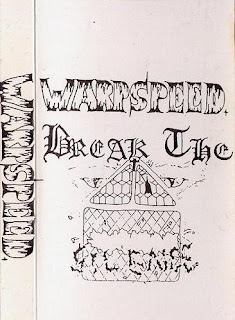 Their 1989 demo is called "Distant Screams" and has 3 tracks on it "Parched Grounds" "Stand Still Timus" & "The Nothing Room". Except as mentioned in the video my copy only has the 2 tracks and I am not sure if that is down to a duplication error by the band or by accidentally overdubbing it myself!! If you have a copy of that track then please do get in touch as I'd love to get hold of it.
You can listen to all the Warpspeed songs I uploaded to YouTube HERE. 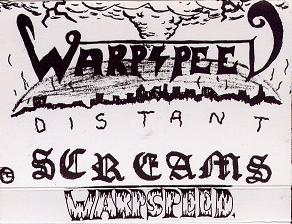 As you can see from this shot of my YouTube account I went to quite some length to try and locate them, including randomly searching the band members by name on Facebook!!

The song "The Nothing Room" also appears on one of my favourite compilations of all time the excellent "A Taste of Armageddon" which featured a wealth of great UK Thrash bands. I've not checked but I hope all the bands from this album made it onto the new 5 CD UK Thrash box-set that just came out! 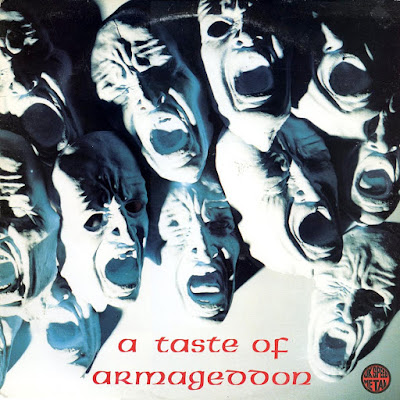 I used to write to bands a lot when I 1st got into underground Metal bands and I kept all my letters and here are some scans of a couple of missives I got from Warpspeed, the 1st talks of a gig that they were meant to play just a mile from my house. I remember how excited I was that I was going to see them again and then how disappointed I was when I got to the pub and found out the gig was cancelled. It also mentions the "A Taste of Armageddon" compilation although not by name. 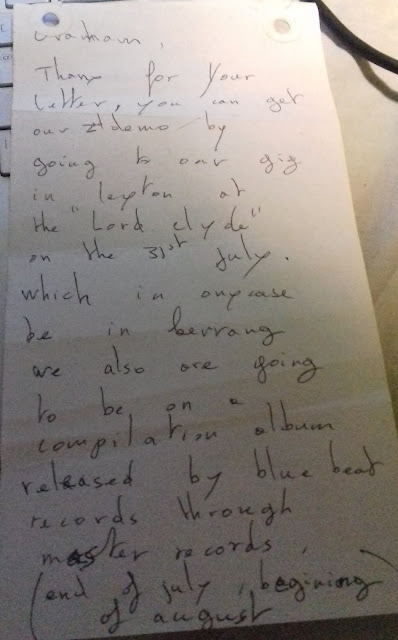 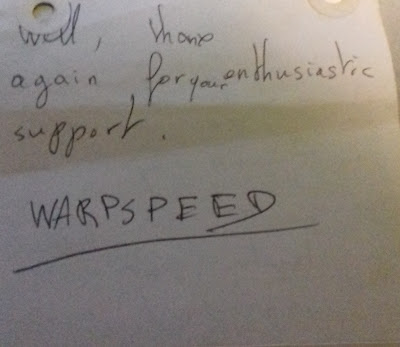 I'd love to see/remember what I wrote to them to know what I said to show my 'enthusiasm' I was probably gushing or something!!

Here's the only other letter I got, this must have been when they sent me the second demo. 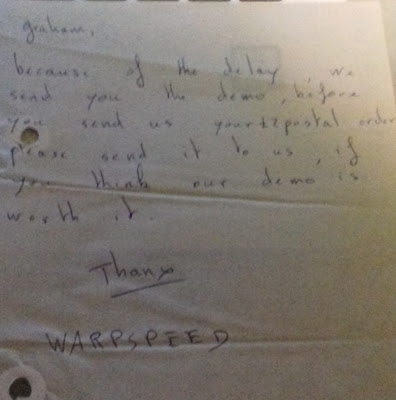 Rest assured I did send them the £2 postal order!!

Anyway years later, it must've been late 2017, I get contacted on Facebook as Ian Glasper has written a book all about UK Thrash and it's being released with a 5 CD box-set and no one, not even the band, have copies of Warpspeed's music!! I think they must have seen that I'd posted the songs up on YouTube so that's how they knew to contact me. I was happy to be asked and converted a track to Wav and sent it to Cherry Red records, I was also a bit peeved though as now I might never get that missing track if the band themselves don't even have it!!

I'd heard about the book/CD box-set coming out already as a guy from another cool Thrash band Zeitgeist had already mentioned it to me. I created the Metal Archives page for them as well and posted their tracks up on YouTube too and he thanked me for helping to raise their online profile, which was nice cos they were another Thrash band I loved and I'll do a blog on them sometime soon too.

I was dead chuffed to get the CD Box-set recently thanks to my mate Kev Hole from Holosade sending me a copy of it, thanks mate. I was even more chuffed to see my name on the thanks list for providing the Warpspeed track, I hope it will help them to get more fans or to reawaken old ones, hopefully an old one who has that bloody track I am missing and can send it my way!! Another mate Rob from Kemakil just told me tonight that he name dropped me and my stepson Liam in his section of the book too! So now I have to buy that to see what he said!! ( I was planning to anyway of course!) 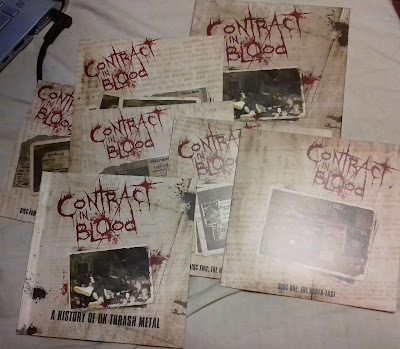 So with the 2nd week of my A to Z of my vinyl we come to B. Some odd stuff in my B's, a couple of nice collectibles too which is very nice.


I wish I had got to meet with Quorthon of Bathory to get my vinyl signed, maybe then I'd have a better story to tell! Never mind as it is I am in, I suspect, a very select band of Graham's that have personalised Bathory LPs!! 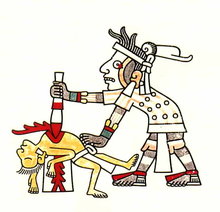 Holy balls of the Gods and Goddesses breasty dumplings but this is a fuck off big show!!! Over 5 hours of tracks and facts and it took me even longer than that to get the bastard put together!! If this was mythology this would have been the ultimate hubris to think I could get it all done at a reasonable time!! So I failed and here is the show, very late indeed but hopefully you'll love the great bands and interesting facts poorly read by me on this week's show!! It's been a bit of a "sacrifice" I know but not quite as bad as how the Aztecs did it for sure!!

The Lamp of Thoth 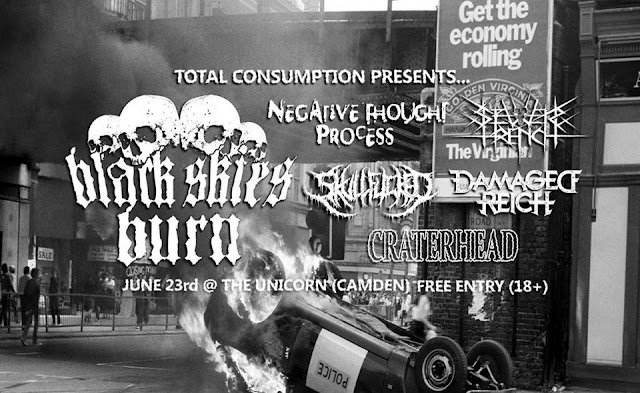 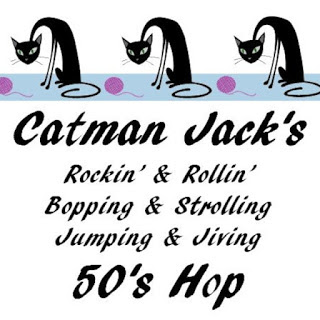 Hello all you crazy cats, kittens and hound dogs, it's Catman Jack's 50's hop here once again to rock your socks and bop your boots!!

Check out the playlist here for a load of greats

1st up for this week's trio of fine Metal freebies we have Warlok from Springfield, Oregon, USA. Started in 2015 it has a demo, a single and a split release to it's name so far, and their 2015, 3 track demo, "Summoning Sickness" is Name Your Price up on their Bandcamp 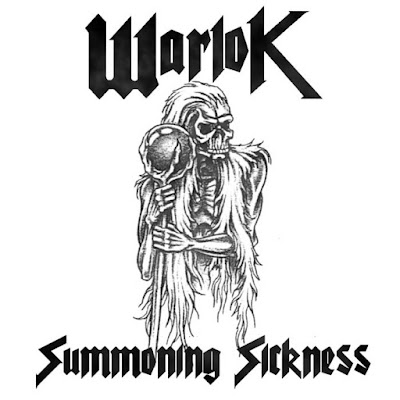 The project is all the work of one guy Matt Edwards who has been in a ton of other bands, the Metal fires must burn brightly in his soul!! Don't delay, go and get hold of it from HERE 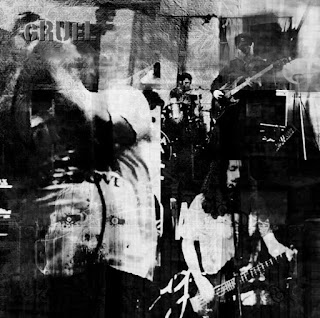 Next we have Post Punk/Metal band Gruel from Birmingham, England, I don't know when they formed but would hazard a guess at 2016/17 as all their 3 releases date from last year...

...and can all be downloaded from their bandcamp page HERE 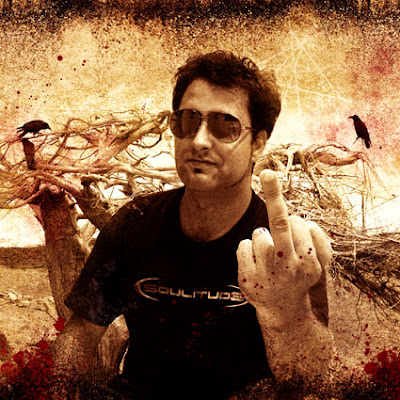 Now for another one man project, this Spanish band Soulitude is all the work of a guy called Jevo. Since 2004, when not playing guitar for his main Power Metal band Valhalla, (who have since split-up), he was bringing out cool melodic Power/Death Metal releases. 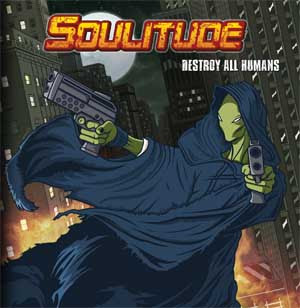 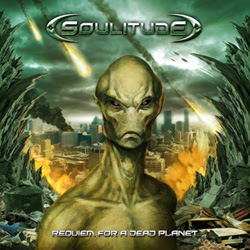 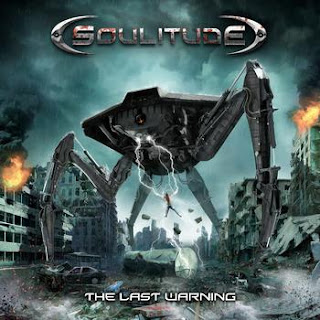 According to Metal Archives he has 5 full albums and a single under this project but all this AND more are up on his official page HERE so run along now and download them all!!


Make sure you tune in to my latest podcast too!! 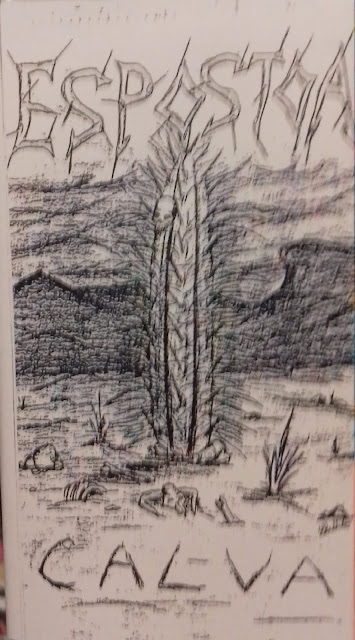 OK this week I have a pretty cool raw, minimalist, Doom Metal two-piece from Preston. The band name Espostoa & demo title are both named after a desert cactus! This information is straight from Metal Archives page, (which I was happy to update with this demo information).
"Espostoa" is the genus of a columnar cactus species that grows in Ecuador, Peru and Bolivia (furthermore, their demo "Calva" is named after a specific specimen, namely Espostoa calva).

This was recorded and released in 1997, they have a 2nd demo too called Naranja who's name rings a bell, I think I have it somewhere in my collection also, so look out for a future blog from me featuring it. 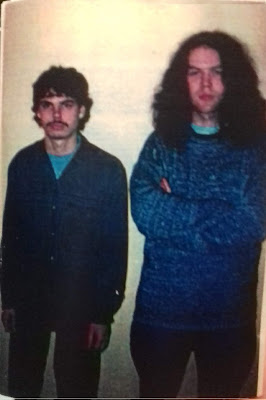 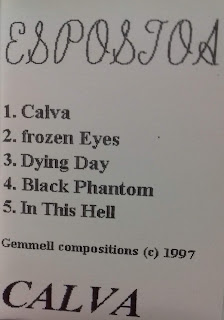 As stated in the video, this is not my music, I just think it's a shame for old demos to be forgotten forever, so if anyone does have rights to this still and does not wish it to be public, do get in touch. Or if you have any more info you think will be cool to add to this blog let me know.