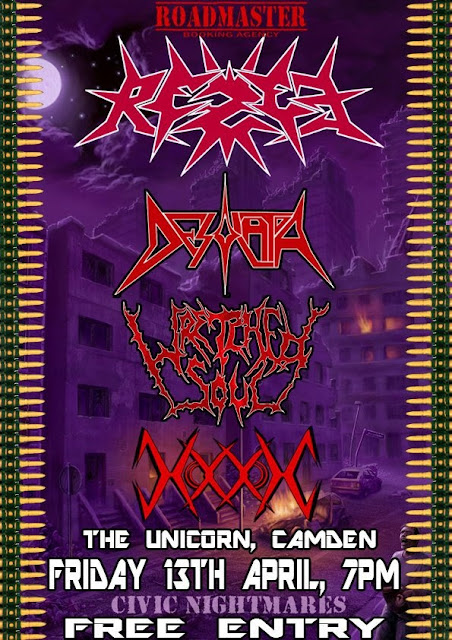 I must have missed XXXX

Wretched Soul was formed in late 2008 amid the mist-veiled marshes and ruined medieval ramparts of Kent, Southern England. In 2011 the band has begun recording their debut album with producer legend Chris Tsangarides (Black Sabbath, Judas Priest, King Diamond etc.). Taking their brand of Thrash/Death Metal to the masses, Wretched Soul never fails to wreck-necks and evoke the true spirit of Metal supporting the likes of Blaze Bayley, Beholder, Eastern Front and Sarah Jezebel Deva. 2012 will see the release of the forthcoming album.

No nonsense thrashers from Southampton playing no nonsense thrash. Taking influence from Tankard, Whiplash and Kreator, Desolator bring the mandatory mosh with raw... everything.

German speed metal skull thrashers touring Europe promoting their 2nd album, with mind melting riffs and total disregard to modern trends. With the speed and technicallity of early Megadeth mixed with the raw fury of Kreator, Rezet promise a thrashing so hard your head will fall off.