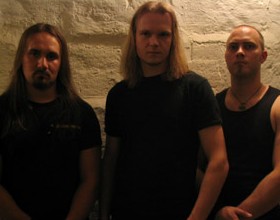 This week on Dem Old Tapes we have Morningstar from Äänekoski, Finland. This trio started out Black Metal early on before transforming into a straight up Heavy Metal band.
They were around from 1989 -1990 as Testator, became Thor's Hammer between 1990 & 1991, then settled on Morningstar from then on til their end in 2007, citing lack of time, personal differences and an injury to their drummer as the reasons for calling it quits. Two members from the last line-up of the band went on to a band called Heathen Hoof.

Their list of releases includes 5 demos, 6 full-length albums, a single, an ep and a compilation, with the final release coming in 2005.

I only have their 3rd promo tape from 1994, I don't recall how it came into my collection, perhaps it was in relation to the zine I was doing around that time

I tried to find this promo online for you but all I could find was this demo track. I will play the other track on my show next Sunday too. The 2nd track Kalevala is an instrumental only.


Or you can get a CD on Amazon